The fourth book in James Gurney's best-selling Dinotopia series transports readers to an enthralling world of art, science, exploration, and invention, where humans and dinosaurs live peacefully together.

In the spirit of Marco Polo and Gulliver's Travels, Dinotopia: Journey to Chandara recounts the journal entries and adventures of explorer Arthur Denison and dinosaur Bix as they explore the exotic eastern realm of James Gurney's Dinotopia.


* A visual masterpiece featuring more than 100 works of breathtaking new art, Dinotopia: Journey to Chandara joins the original Dinotopia: A Land Apart from Time and Gurney's two other series creations, Dinotopia: The World Beneath and Dinotopia: First Flight, in exploring a fully rendered world, complete with its own language, geographic locations and history, and confluence of cultures and characters.

* Gurney is the recipient of seven Chesley Awards from the Association of Fantasy Artists, two Hugo Awards from the World Science Fiction Convention, and Best of Show from the Art Director's Club. His art currently appea 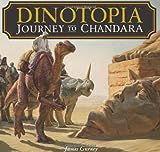